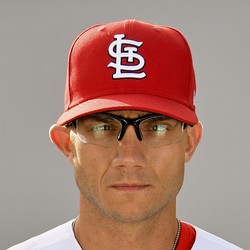 Brett Cecil to start rehab by this weekend

John Mozeliak has stated that Brett Cecil could likely start a rehab assignment this weekend.

Cecil will likely need the entire 20-day rehab window to get back in to game form after missing extended time. Cecil will likely return in mid-to-late May. When Cecil returns he'll be used as a quality left-handed option, but it is unlikely that he'll pick up enough holds to offer any sort of fantasy value.