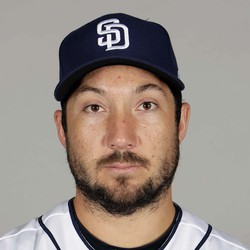 Brett Wallace got the start at first base on Sunday for the Padres in an inter-league spring training game against the White Sox. He went 1-for-2 with a solo home run. The home run came in the seventh inning and unfortunately was the only positive take away from what's been a tough spring training so far.

Wallace will be used as a spot starter from time to time so guys can get rest, but in 2016 he won't get to fantasy relevancy. Look elsewhere for first baseman to complete your team this season.