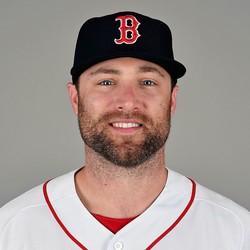 Bryce Brentz went 3-for-4 and drove in two runs and scored a run in Monday's 13-7 loss to the Rays.

Brentz has been red hot since being called up from Triple-A and is hitting .467 with one homer and three RBI in four games with Boston. He may be worth a short-term pickup in fantasy leagues while he is hot, but Brentz will not be able to keep up this type of hitting at the major league level.