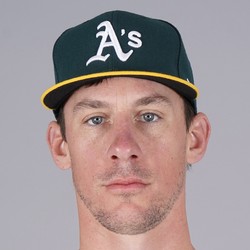 Bassitt doesn't do much to help fantasy owners, but he doesn't hurt them either with respectable numbers all around. Although he was slated to begin the year as a starter due to A.J. Puk's shoulder concerns, with the postponement of Opening Day, he might find himself back in the swingman role. Either way, Bassitt has little strikeout upside and isn't worth more than a spot in an AL-only rotation.

Chris Bassitt allowed two hits (one of those a home run), two earned runs, and two walks over three innings of work Tuesday against the White Sox. He did not record a strikeout.

Bassitt joined the rotation in April last year winning ten games over 144 innings while providing 141 strikeouts and a 3.81 ERA. His peripheral numbers hint at regression this year, he does not miss bats and his xERA was 4.41 last year. Bassitt might start out in the rotation depending on A.J. Puk’s shoulder, but will not provide much of a fantasy impact in season long leagues.