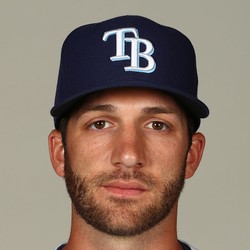 Colin Poche picks up his first career save on Friday

Colin Poche earned the first save of his big league career on Friday, retiring all three hitters that he faced to preserve a two-run lead against the Blue Jays.

Poche has worked as a middle reliever this season and overall has three blown saves with a 6.46 ERA. The 25-year-old reliever probably won't see many opportunities with Diego Garcia and Emilio Pagan ahead of him.