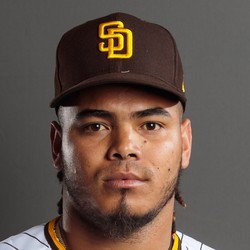 Lamet is a popular breakout candidate this year, after he returned from Tommy John surgery to throw 73 innings of solid baseball last year. Lamet is still much more potential than numbers - he hasn't dominated a level above A-ball and has questionable control. But his raw stuff, particularly his slider and curveball, are impressive, and he can miss bats with the best of them. They'll be no discount for Lamet this year, but if you're looking for upside, he's worth the gamble.

Dinelson Lamet strikes out 10 in final start of the season

Dinelson Lamet received a no-decision on Wednesday against the Dodgers, striking out 10 while giving up four runs on six hits over five innings pitched.

He also issued two walks. Lamet's final start of the season was a lot like the rest of his, displaying a ton of strikeout upside despite giving up some runs. The 27-year-old started 14 games this year, posting a 4.07 ERA with 105 strikeouts in 73 innings. He's a name to remember for the end of 2020 fantasy drafts.

Brendan Tuma - Too Much Tuma22 weeks ago