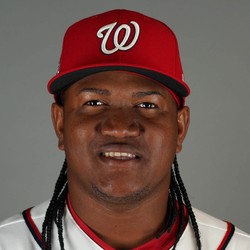 Enny Romero traded to the Nationals

Enny Romero saw his stock tumble from a top prospect to being traded to the Nationals for a low-level prospect. Romero was a top SP prospect coming up through the system, but only made one career MLB start. He had a 5.91 ERA in 52 games last season.

Romero had an 11-7 record and 2.61 ERA with Triple-A Durham in 2013, earning him a spot start with the Rays where he allowed one hit in 4 2/3 scoreless innings pitched. He did not make the 2014 rotation, going back to Durham and posting a 4.88 ERA, and fell off of the radar after that. He is a left-handed pitcher that has struck out 9.1 batters per nine over 80 1/3 innings, but his five walks per nine make him a little more than a flier for Washington.