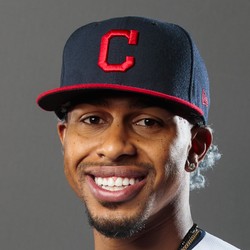 Lindor's 2019 season got off to a rocky start with a right calf strain in February followed by a sprained left ankle in March. But when he returned in late April, he didn't miss a beat, putting up a classic 30-20 season and contributing in all five categories. There were some minor negatives for Lindor - his strikeout rate went up, his walk rate went down, and he had an expected batting average of just .276, the lowest of his career. But Lindor's floor at this point is so enormously high that he's one of the few no-risk players, and he shouldn't slip past the top 10 in drafts or, frankly, the top seven.

Jason Lloyd of The Athletic writes that Francisco Lindor has halted contract negotiations with the Indians.

Lindor is still under team control for two more season and wants to stay in Cleveland long-term. However, the Indians do not historically sign players to big-money contracts, and they have yet to meet Lindor's asking price. It seems likely the 26-year-old superstar is traded within the next calendar year.