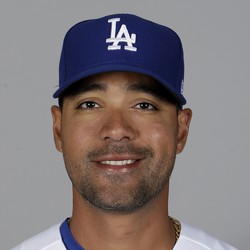 Franklin Gutierrez started and batted cleanup against Cubs lefty Jon Lester on Monday night, but he had to leave the game after suffering a hamstring injury while caught stealing on a hit-and-run play in the second inning.

The severity of Gutierrez's injury is unknown at this point. If he's up to it, he would likely next be called upon to start against Brett Anderson in Thursday's series finale against the Cubs. If the Dodgers decide to place Gutierrez on the disabled list, candidates to fill his lefty-mashing bench role include Trayce Thompson, Brett Eibner, and Rob Segedin, all currently at Triple-A.