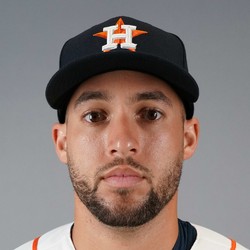 If not for the 40 games missed, we might be talking about Springer as the reigning AL MVP. He was on pace for over 50 homers, 125 RBIs and 125 runs. There isn't much speed but the upside for the other four categories makes him an amazing value in the fourth round of drafts.

George Springer: Astros have 'made it clear' they want to re-sign him

Chandler Rome of the Houston Chronicle writes the Astros have "made it clear" to George Springer's representatives that the franchise wants to sign him to a long-term deal.

The 2017 World Series MVP was drafted and developed by the Astros so it makes sense why they would want to keep him around for years to come. Springer is a free agent after this season and will likely command one of the biggest contracts on the open market this winter. The 30-year-old was phenomenal in 2019, belting 39 homers with a .974 OPS in just 122 games played.