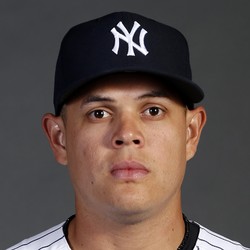 Urshela was among the most surprising breakouts in 2019, batting .315 with 21 homers for the Yankees. Although that isn't going to keep up, he earned playing time in New York and may prove worth of that 20th round ADP.

Gio Urshela expected back in lineup on Friday

Gio Urshela (hand) is expected to return to the lineup on Friday against the Rangers according to Lindsey Adler of The Athletic.

Urshela left Tuesday's game after getting hit by a pitch in the hand. His X-rays were negative but he will sit for at least one game and will get another rest with the Yankees' scheduled off-day coming up Thursday.