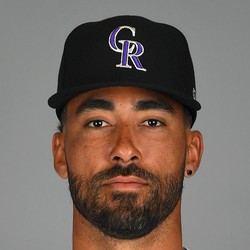 Ian Desmond went 2-for-3 with a two-run homer as the Rockies beat the Giants in 16 innings on Tuesday.

Desmond's homer was a game-tying shot off Madison Bumgarner way back in the fourth inning. He was eventually pinch-hit for and didn't have to play all 16 innings. The 34-year-old now has 19 homers and a .778 OPS this season. He's no longer a dynamic fantasy asset since he also has just three steals.