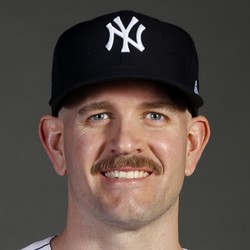 Paxton will be out until at least early May (and likely longer) after undergoing a microscopic lumbar discectomy with removal of a peridiscal cyst in early February. Although his talent is undeniable, this is yet another in a long list of injuries for Paxton, who has eight injured list stints since the beginning of the 2014 season. While early May is the front end of the three to four month timetable, expect Paxton's absence to last until at least June and possibly longer if he has any setbacks.

James Paxton (back) threw a simulated game Sunday at Yankee Stadium according to Lindsey Adler of The Athletic.

Adler notes that Paxton did so behind an L-screen after teammate Masahiro Tanaka was hit in the head by a line drive on Saturday. After a delay to the start of the season, Paxton is now expected to be a member of the Yankees' season-opening starting rotation after requiring a microscopic lumbar discectomy in February.