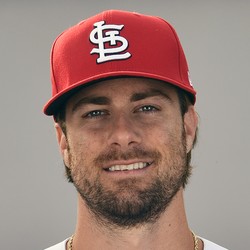 John Gant allowed one hit and two walks while striking out three through four scoreless in Saturday’s Grapefruit League win over the Astros.

Gant is competing for one of the two Cardinals rotation spots, and made a strong case for it by firing four scoreless innings on Saturday. He owns a 3.12 ERA, 0.92 WHIP with eight strikeouts across eight 2/3 innings this spring. Gant has 11 major league starts in his career, and he if keeps up his strong spring, the 27-year old could outright win one of the open starting rotation spots.