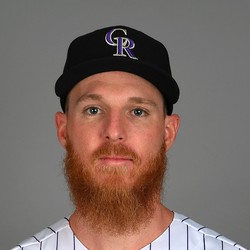 Gray is another pitcher who would benefit from leaving Colorado. Also, water is wet.

Jon Gray (foot) was placed on the 60-day injured list Wednesday with a foot fracture.

It’s unclear when Gray suffered the injury, but he will miss the remainder of the season. Gray will end the season finishing with a 3.84 ERA, 1.35 WHIP, and 150:56 K:BB through 150 innings. Tim Melville was called up from the minors in a corresponding move.