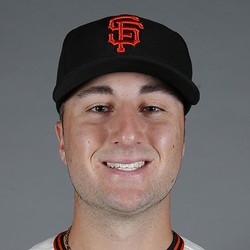 Top prospect Joey Bart was included in the Giants' player pool for the 2020 season.

As expected. Most every MLB team is placing their top prospects on their player pool to give them some development without a minor league season. The 23-year-old is considered the organization's catcher of the future. Bart would likely push for a big league job if the Giants were considered to be more competitive this year. They might opt to play it safe and have him debut in 2021, though.