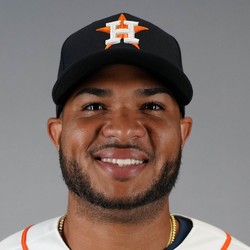 James still has legitimate ace upside if he can harness his arsenal and find his way into Houston's rotation. There is a chance this fireballer breaks camp in the rotation and if he does, we may just be looking at 200+ strikeouts in 2020. After all, his on-paper ratios may not seem great from 2019, but his xWOBa was above the likes of Mike Clevinger, Stephen Strasburg, Blake Snell and Walker Buehler. I don't need to tell you that this means he has ace stuff. But folks, he just might be the best pitcher in the Astros rotation this year if they give him the ball in the first inning.

Josh James took the loss in Tuesday's split squad game against the Braves, giving up three runs on four hits over 3 2/3 innings.

James struck out four and walked three in the outing. The walks are certainly a concern as that has been a consistent problem for him in his big league career. The strikeout upside is immense, and James will likely begin the year in the rotation if Justin Verlander is forced to miss time, but his ability to limit free passes will ultimately determine his success.