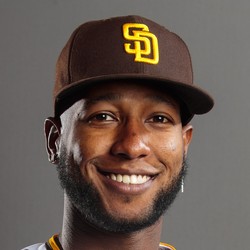 Profar may have batted .218 but he is still young enough that we can expect some improvement. Even if we don't get it, he is strong enough in the other four categories that you can use a late-round pick on him knowing you'll get steady production.

Jurickson Profar to focus on second base with Padres

MLB.com is reporting that new Padres manager Jayce Tingler wants Jurickson Profar to focus on second base to begin the season.

Profar has been all over the diamond with his previous two clubs, providing fantasy players with utility options. Depending on your format, he should retain multi-position eligibility for 2020. Tingler indicated that he wants Profar to work on his throwing, so fantasy owners should temper expectations that the former top prospect will come out of the gate firing as an offensive weapon. However, Profar did post an OPS of .824 with 10 homers in just 167 at-bats after the All-Star Game last year, flashing some of Profar's potential value.