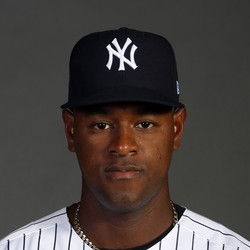 Severino missed most of last year with an injury and dealt with some forearm tightness in October. Several (relatively) clean offseason scans were supposed to alleviate concerns, but Severino immediately had identical forearm pain to that he felt in October once he started throwing in camp. There's no word yet on the severity of Severino's injury, but it seems unlikely that he will break camp with the Yankees, and obviously could be looking at an extended absence. Like last year, it's all about your risk tolerance at this point with Severino, but with pitching at a premium, fantasy owners would be wise to avoid him until the late rounds until we learn more.

Yankees manager Aaron Boone says Severino will be away from the team for about three days in order to see "a number of" specialists in the Bronx. This is certainly concerning news for a pitcher who missed almost all of the 2019 season due to arm issues. We should get some concrete news about Severino's injury in the coming days.