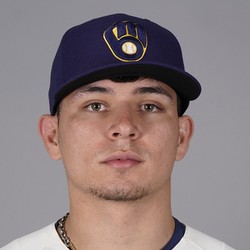 Urias only batted .219 in his anticipated rookie campaign but it was a small sample size so we shouldn't quite give up on him yet. Rather, this is someone worth putting on waiver-wire speed-dial following drafts in case he starts to break out.

Luis Urias is expected to be sidelined six-to-eight weeks after undergoing surgery on his left wrist Tuesday.

Urias initially suffered a fractured left hamate bone during winter ball in Mexico, and is expected to be sidelined six-to-eight weeks. The 22-year old was recently acquired from the Padres as part of the Trent Grisham deal, and was expected to slot in as the everyday shortstop. Urias is in danger of missing opening day as an eight week recovery would have him returning late March. Orlando Arcia will enter the season as the starting shortstop while Urias is sidelined.