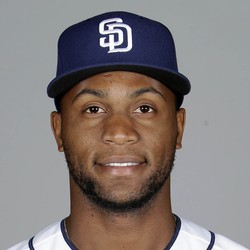 Miguel Diaz pitched one inning allowing one hit, five earned runs, and a grand slam during Saturday's 10-2 defeat to the Los Angeles Dodgers.

Diaz also managed to walk three batters. Prior to the meltdown, the Padres faced a 5-1 deficit heading into the top of the ninth inning. With runners on second and third, Diaz tossed a wild pitch which plated Joc Pederson and increased the Dodger lead to 6-1. Two walks later, Diaz left a meatball hanging up in the zone on an 0-and-2 count to Dodgers first baseman Cody Bellinger. Bellinger responded in kind by blasting a grand-slam to right. Serving in a late-inning relief role thus far, Diaz has failed to close much of anything this season, allowing 12 earned-runs in 13 innings pitched on the 2017 season.