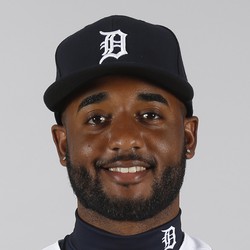 Goodrum isn't going to hit even .250 but this a multi-position guy for your bench that will hit a dozen homers and steal a dozen bases.

Niko Goodrum could be done for the season

Niko Goodrum (groin) may not be able to play again this season. "It just depends on how he does after the recovery," Gardenhire said, regarding Goodrum's chances of returning from the 10-day injured list. "He's going to have to lay off of baseball activities so, we'll see. I'm sure he will try to get back and play a little bit. But we'd be pushing the envelope with that."

Goodrum was placed on the IL over the weekend after aggravating his left groin August 17th. After meeting with Dr. William Meyers in Philadelphia on Monday, Goodrum's injury was reclassified as an adductor strain. He won't be cleared to resume on-field work until at least mid-September. Willie Castro and Ronny Rodriguez will replace Goodwin in the Tigers infield.