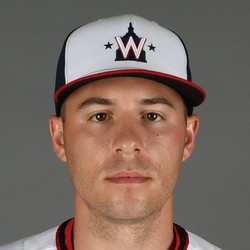 Corbin largely followed up on his breakout 2018 season with the Nationals last year, again reaching the 200-inning plateau and pitching to a low-3.00 ERA. He continued to lean heavily on his outstanding slider, against which batters hit just .158. His walk rate and strikeout rate rose and fell just a tad from his peak, a trend that fantasy owners can expect to continue. But Corbin's baseline is excellent and even with further slow decline in skills, he should be an outstanding starter for a fantasy rotation.

Corbin struck out 238 batters last season and enters the year as part of Washington's "Big Three" along with Max Scherzer and Stephen Strasburg. He is projected for well over 200 strikeouts once again and could be a bargain for fantasy owners who do not spent the draft capital to grab Gerrit Cole, Jacob deGrom, Justin Verlander, Jack Flaherty, Scherzer, Strasburg, or Walker Buehler in the first two rounds.