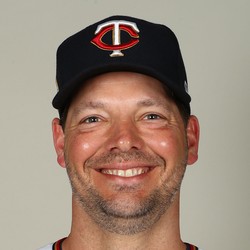 Rich hill (elbow) has begun a throwing program and hopes to make his Twins debut in early-June.

Hill is on his second week of throwing and hopes to ramp up to long toss in a few weeks. The lefty underwent "primary and revision" surgery on his elbow in October before signing a one-year, $3 million contract with Minnesota. If all goes well he could start a rehab assignment in late-May.

Brendan Tuma - Too Much Tuma3 days ago