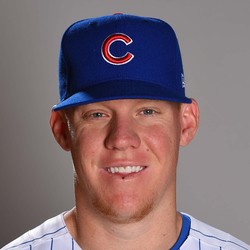 Rob Zastryzny picks up save Tuesday

Rob Zastryzny worked a 1-2-3 inning on Tuesday against the Braves to earn his first save of the spring. He struck out two in the 8-5 victory.

Zastryzny showed some promise as a Cub a couple years ago, but pitched entirely in the Dodgers' minor league system last year. He lacks both command stuff, so he's not a threat to pick up saves during the regular season.