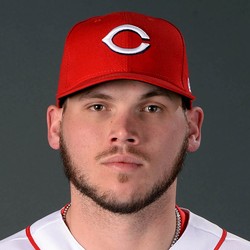 Rookie Davis allowed three runs on four hits over three innings in the Pirates' 10-4 loss to the Brewers on Friday.

It was a rough outing for Davis, something he is no stranger to based on his history. He had a 5.35 ERA at Triple-A prior to his promotion, and put up an 8.63 ERA in six starts for Cincinnati in 2017, his only prior big league experience. His next start comes Wednesday at Atlanta, but no fantasy owner should deploy him in that or any situation.