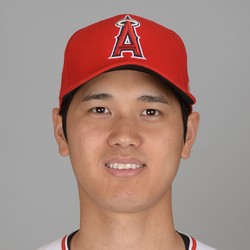 Ohtani didn't pitch at all in 2019 and likely won't do so until mid-May in 2020. But his bat looked just fine last year, proving that his 2018 skills he showed as a hitter were not a fluke. He'll likely settle back into a part-time DH role with the Angels, and if you can choose to deploy him as both a pitcher and a hitter in any given week, Ohtani should provide immense value as a fantasy player. Even if not, he should contribute on either end of the spectrum, so draft him with a high degree of confidence.

Shohei Ohtani (elbow) throwing off the mound, ramping up activity

Shohei Ohtani is throwing off the mound, "ramping up intensity and volume," per Angels' GM Billy Eppler.

Ohtani was expected to start the season limited to DH duties as he continues to recover from Tommy John surgery. With the MLB season expected to start in July, the two-way star could be in the Angels' rotation by Opening Day. It was reported that Ohtani was throwing two bullpen sessions a week. Ohtani should be all systems go by the time the season starts, making the 25-year-old even more valuable in fantasy. The two-way player is currently ranked 119th overall, but that number could sky rocket if he is fully recovered from his elbow injury by Opening Day.