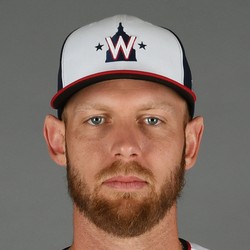 Strasburg reached the 200-inning plateau for the second time in his career, and set a career high in wins with 18. Other than staying completely healthy, however, his numbers looked pretty much as they always have - just below the truly elite pitchers, but worthy of coming from your ace. Don't be sucked in by his magical postseason (1.98 ERA, 0.94 WHIP). Draft Strasburg as a top-10 pitcher, but his expect his usual low-3.00 ERA and solid all around numbers.

Stephen Strasburg agrees to deal to return to Nationals

Stephen Strasburg has agreed to a deal to re-sign with the Washington Nationals, according to a report from MLB insider Jon Heyman. Jeff Passan adds that the deal is for $245 million over seven years.

It was known coming into the offseason that the Nationals wanted to re-sign Strasburg, but the question was whether or not they would be able to afford him once he hit the open market and started receiving offers from other teams. Free-agent Zack Wheeler agreed to a five-year, $118 million contract with the Phillies last week, and Strasburg was expected to easily surpass that amount while falling short of what will likely be a record-breaking contract for fellow free agent starting pitcher Gerrit Cole. $245 million is now the likely starting point in any negotiation for Cole.