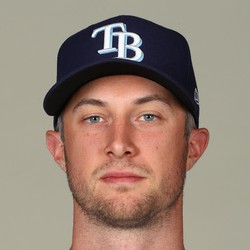 Trevor Richards picks up the win for the Rays on Saturday

Trevor Richards picked up the win in a victory over the Angels on Saturday, firing two scoreless innings during which he allowed two hits and did not record any walks or strikeouts.

Richards has been pitching well for the Rays who acquired him at the trade deadline from the Marlins. The right-hander has allowed just three hits over the 4 2/3 innings. Richards is not worth owning at the moment unless he gets back into a starting role.