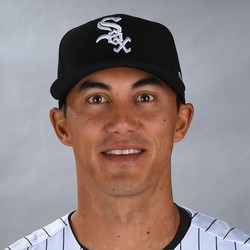 Tyler Saladino went 1-for-2 with a walk, a stolen base, and a grand slam in Monday's loss to the Reds.

After never hitting a grand slam in his major league career until Sunday, Saladino now has back-to-back games with slams. This time, it came off Raisel Iglesias to put the Brewers ahead in the eighth. Despite this unheard of string of grand slams, Saladino is only batting .130 with seven hits in 22 games.