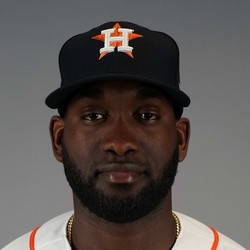 It was just an 87 game sample size but in that time, Yordan was clearly one of the top five hitters in baseball. He won't steal any bags, but 50 homers, 140 RBIs and a .320 batting average is within the realm of realistic possibilities. He comes with some risk, however, since we haven't seen it for an extended time.

The BBWAA announced Monday that Yordan Alvarez is the 2019 American League Rookie of the Year.

Alvarez received all 30 first place votes. The 22-year-old didn't make his big league debut until June but was simply incredible upon arriving. In 87 games Alvarez batted .313 with 27 homers and a 1.067 OPS. He'll surely be an early-round fantasy selection come Spring 2020.