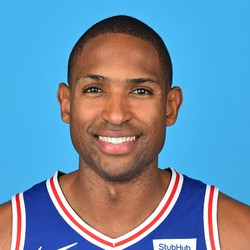 After starting the season as a reliable fantasy option, Horford has now become a liability and has been benched by the Sixers. If you’re still holding on to Horford, you’ll only be playing him in emergency situations. If you need the roster spot, feel free to cut him loose.

Horford has struggled recently, failing to score double figures in five of his last seven contests. He is averaging 7.9 points, 6.1 rebounds, 2.7 assists, 1.0 blocks and 1.6 triples during that span. Horford has come off the bench the last two games as the team has opted to start newly acquired Glenn Robinson. Despite the recent slump, the 33-year old veteran has been solid all season and is worth holding onto standard leagues. The 76ers next scheduled game is Saturday, away against the Bucks.

Horford tied his career-high in threes (five) in Thursday's loss to the Bucks. He has only scored double figures once in his last three contests, but has buried at least one triple during that span. Horford is providing around top-200 value, averaging 12.4 points, 6.7 rebounds, 3.9 assists, 0.9 steals, 0.9 blocks and 1.5 triples across 47 games this season. The 76ers next scheduled game is Friday, home against the Grizzlies.

Al Horford (knee) is probable for Saturday’s game against the Celtics.

Horford missed Thursday’s contest against the Hawks due to right knee soreness. He is listed as probable for Saturday’s game, and is expected to play. Fantasy owners should continue to monitor his status closer to tip-off. Horford is averaging 15.7 points, 6.7 rebounds, 4.0 assists, 1.0 steals and 0.9 blocks across 44 games this season.

Al Horford (knee) will not play in Thursday’s game against the Hawks.

Horford will miss Thursday’s contest against the Hawks due to left knee soreness. He will miss his fifth game of the season. His next chance to return will be Saturday’s tilt against the Celtics. Mike Scott should see an expanded role with Horford sidelined.