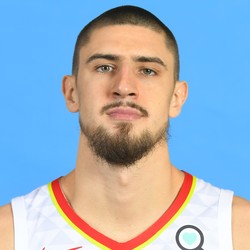 Len was acquired by the Kings at the NBA trade deadline and has missed the last 10 games due to a hip injury. He was able to suit up Saturday and make his Kings debut. Len logged 16 minutes and grabbed eight rebounds in Saturday's win. He is averaging 8.6 points, 5.8 rebounds, 1.0 assists and 0.8 blocks across 41 games this season. The 26-year old remains a deep-league option for now. The Kings next scheduled game is Tuesday, away against the Warriors.

Alex Len (hip) will not play in Thursday's game against the Grizzlies.

Len has not played since January 24th due to a strained right hip. He did fully practice on Wednesday and is trending in the right direction to return to action soon. Look for Harry Giles to see an expanded role with Len sidelined.

Len has been out with a right hip flexor strain since Janary 24th. He is averaging 8.7 points, 5.8 rebounds, 1.1 assists and 0.8 blocks across 40 games for the Hawks this season. His fantasy value will remain the same, as he will most likely come off the bench to backup starter Richaun Holmes. Len is only worth hanging onto in deep-league formats.

Alex Len (hip) will not play Thursday against the 76ers.

Len will miss his third straight game due to a strained right hip flexor. Look for Damian Jones to see an expanded role once again with Len sidelined.

Alex Len will miss Tuesday's tilt with Toronto due to a hip injury.

He'll miss his second straight contest, and with Bruno Fernando unlikely to play, John Collins will draw the start at center Tuesday.