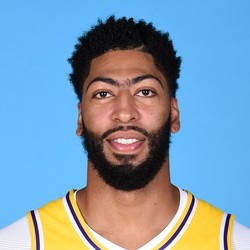 Anthony Davis (elbow) is listed as probable for Thursday’s game against the Rockets.

Davis continues to battle elbow soreness, but is expected to play Thursday’s tilt. He is having a terrific first campaign with the Lakers, averaging 26.7 points, 9.4 rebounds, 3,1 assists, 1.5 steals and 2.4 blocks across 55 games this season.

It was a relative down night for Davis, who's typically good for a double-double. He's perpetually on the injury report but as long as he plays he needs to be in fantasy lineups.

Anthony Davis (elbow) is probable versus the Brooklyn Nets on Tuesday night.

AD looks like he's going to labor through his elbow injury and suit up against the Nets on Tuesday night. Over his past 10 games, Davis has been feasting by averaging 27.7 points, 10.6 rebounds, 2.3 assists, 2.9 blocks, 1.3 steals across 33 minutes.

A typical night for AD recently. That's his third straight 30-point game, and in his last three games, he's averaging 32.3 points and 10 rebounds in 34 minutes per game. Davis, surprisingly enough, isn't even sitting out very many games, which comes as a huge gift to his fantasy owners. If AD plays most of the Lakers games down the stretch, he's going to pay huge dividends in the fantasy playoffs as the Lakers try to stave off the Clippers and lock up the #1 seed and home court throughout the playoffs.

Davis looked like he wanted to enter into the MVP conversation with LeBron and Giannis. He only needed 29 minutes to put up 30 points and nine boards against the Bucks tonight. AD continues to be a 9-cat machine, and as long as he can stay healthy, he's going to pay major dividends for fantasy owners down the stretch. The Lakers haven't played a back-to-back set since January, but they have two fast approaching in the month of March. Expect Davis to potentially sit one night of each of those back-to-back sets.