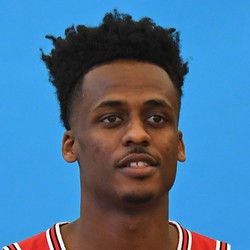 Antonio Blakeney scored 13 points with three rebounds and two steals in the Bulls' 119-116 loss against the Pacers.

Antoinio was the leading scorer for the second unit as usual. He is a good salary relief for DFS purposes.

Antonio Blakeney scored eight points with two rebounds in the Bulls' 111-96 loss against the Timberwolves.

Blakeney saw 20 minutes off the bench and did not do much with them. Antonio's inconsistency does not warrant him as a smart punt play in DFS.

Antonio Blakeney scored 13 points with three rebounds and one assist in the Bulls' 122-83 loss against the Raptors.

Blakeney had the team high in this game on 19 attempts. Antonio only hit a third of his shots and was a major factor in the loss.

Antonio Blakeney scored nine points with three rebounds, and two assists in the Bulls' 99-98 win over the Cavaliers.

Blakeney has the green light to shoot when the Bulls' second unit is on the floor. This make Antonio a sneaky good punt play in GPP formats.

Antonio Blankeney scored 17 points on 6-for-13 shooting, including 1-for-5 from beyond the arc in Monday night's 116-115 win over the Knicks. He added one rebound, two steals and one block to his stat line over 20 minutes off the bench. Blankeney led the Bulls second unit in minutes and points.

Blankeney has been quite a surprise for the Bulls this season. He definitely is not afraid of getting shots up and while he doesn't offer really anything in the supplemental statistical categories he can score effectively. He's scored in double-figures in four of the past five games in very limited playing time (18 minutes per game average). For the season he's averaging 11 points on 50 percent shooting from the field. It could be something if he found himself on the court more, but for now he would best be used as a high risk value play for DFS purposes.