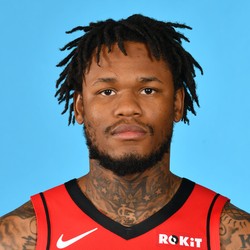 McLemore continues to start at Small Forward over Danuel House Jr. and outproduced him again in this one. Although the 38 minutes may be a little high due to Russell Westbrook (rest) being out, McLemore seems to have a secure starting role for the foreseeable future.

McLemore went for single-digit points for the fourth straight game, making little impact in the box score overall. He's cooled off in a big way since his early December surge, though he's still seeing just a tick under 24 minutes per contest. He doesn't need to be started outside of deep leagues, though he would be in for a bigger role should Danuel House be forced to miss any time in the future.

Ben McLemore finished with 18 points (6-for-7 3Pt), two assists, and one rebound in 27 minutes against the Magic on Friday.

Solid shooting from McLemore in this game but his value is taking a hit with Danuel House Jr. back in the starting lineup.

McLemore saw his production trail off a bit in this one, but he encouragingly saw 33 minutes off the bench -- six more than starter Danuel House. McLemore's white-hot play in three starts from Nov. 30 - Dec. 5 -- filling in for House -- saw him go for 21.0 points and 5.3 boards while knocking down an absurd 5.7 triples per contest. That offensive spark was obviously enough to earn him some extra playing time, as he's now logged at least 30 minutes in back-to-back games with House on the court. If McLemore is still available, he's worth a speculative pickup, even in 12-team leagues due to his ability to catch fire offensively.

McLemore has performed well in the Eric Gordon role, scoring at least 24 points in three of his last four games. He's also gone 22-45 from behind the arc in that same span, good for almost a 49% conversion rate. Though he doesn't do much other than get buckets, you might as well ride with him until he cools down. His next chance to solidify his role will come on Monday against the Kings.