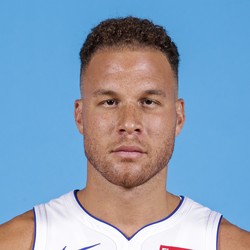 Blake Griffin held a conference call with the media where he discussed his rehab from knee surgery and his future plans with Detroit. He is not at 100% yet, but is doing on-court workouts and is confident he'll get there "quickly" according to Omari Sankofa of the Detroit Free Press.

Griffin had surgery on his left knee in January - a recurring injury that's plagued him dating back to the 2018-2019 season. Though the Pistons are in the midst of a rebuild, Griffin's contract is fully guaranteed through the 2021-2022 season which doesn't bode well for his title chances given his age and storied injury history. However, the extended break from play has offered Griffin plenty of time to get healthy and ready for next season. He'll have less front-court competition with Andre Drummond now in Cleveland and he'll serve as a mentor and compliment to budding foward/center Christian Wood. Fantasy owners who believe in Griffin should be able to get him at a discount next season after putting up the worst numbers of his career but he'll still carry considerable risk. Griffin's 2019-2020 season ended averaging 15.5 points, 4.7 rebounds, and 3.3 assists across 18 games.

In a recent interview, Pistons F Blake Griffin (knee surgery) told ESPN’s Sage Steele that “I feel great, so I’m ready to go whenever things pick back up.”

Griffin had knee surgery in January after playing in just 18 games this season for the Pistons. He was averaging just 15.5 points, 4.7 rebounds, and 3.3 assists in 28 minutes per game. He shot a miserable 35.2 percent from the field, by far the worst shooting of his 11-year NBA career. Should the NBA resume play, Griffin will be ready, but temper expectations for the veteran forward, who could just play it safe with Detroit nowhere near a playoff berth. Hopefully Griffin can get back to his old ways to begin the 2020-2021 season. He won’t have Andre Drummond to contend with for rebounds any longer, as he’s since been traded to the Cavaliers. It’ll be Griffin and up-and-comer Christian Wood leading the way in the front court for Detroit next season.

On January 10th the Pistons applied for a disabled player exception for the season-ending injury to Blake Griffin and the league just granted it.

This move finalizes the suspicions that Pistons fans and Blake Griffin owners both feared. The star forward will not play for the remainder of the season. Sekou Doumbouya and Markieff Morris have both seen an increase in minutes with Griffin out but Doumbouya is the only one with year-long fantasy value. In case it wasn't already clear, Griffin should be dropped in all formats.

Blake Griffin underwent arthroscopic surgery on his left knee and will be out for “an extended rehabilitation period.”

It likely spells the end of his season, as Griffin has been rumored to be a shut-down candidate for the last couple of weeks. He’s appeared in just 18 contests in 2019-20, providing highly underwhelming results. If you’re still holding onto him, you can cut him loose to the waiver wire.

Blake Griffin will be visiting a specialist this week and it appears that season-ending surgery is an option on the table.

Griffin had knee issues last year and had surgery before this season tipped off. He's only been able to suit up for 18 games so far this season as the same knee has been ailing him. Sekou Doumbouya has been starting in place of Griffin. While Doumbouya might not be able to replicate Griffin's 15.5 points, 4.7 rebounds, and 3.3 assists, the Pistons drafted him in the first-round with hopes that he could be a great player. Hold Griffin on your roster until more news breaks, but be sure to pick up Doumbouya right away.

Dave Kluge26 weeks ago
Should I Trade...?
Do Not Sell
Are you looking to contact Customer Support about a subscription or account related question?
Yes
No, I'm a California resident looking for the California Consumer Privacy Act form