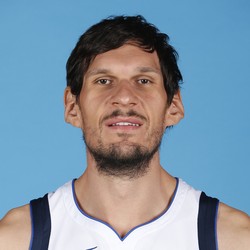 The towering Serbian was ultra-efficient again, nearly putting up yet another double-double in limited action. Unfortunately for fantasy owners, his use in the rotation is too sporadic to trust as of now.

Boban Marjanovic made the most of his 20 minutes Tuesday night, scoring 13 points and grabbing 11 rebounds for the Mavericks.

With Kristaps Porzingis nearing a return to action, Marjanovic might see his role reduced. If Porzingis struggles to stay healthy throughout the remainder of the season, Marjanovic would be a top waiver wire pick for deeper leagues.

Marjanovic posted season-highs in points, rebounds and blocks in Saturday's win. He is averaging 7.5 points, 5.5 rebounds and 0.7 assists across 10 games this season. Marjanovic's minutes are to inconsistent to be considered a reliable fantasy option, but he should be owned in deep league formats. The Mavericks next scheduled game is Sunday, home against the Kings.

Boban Marjanovic finished with 10 points (4-6 FG, 0-0 3Pt, 2-2 FT), six rebounds and two turnovers across 20 minutes during a win against the Golden State Warriors on Wednesday.

Marjanovic's fantasy effort on Wednesday was solid for his role but he remains a player to be left on waivers for redraft leagues. Marjanovic will look to build on his latest game when the Mavericks host the Cavaliers on Saturday.

Marjanovic moved into the starting lineup with Kristaps Porzingis (rest) given the night off. He played just 16 minutes but was able to contribute across the board. Until he sees a bump in minutes, Marjanovic is only worth being used as a streamer on nights Porzingis is out. The Mavericks next scheduled game is Monday, away against the Celtics.