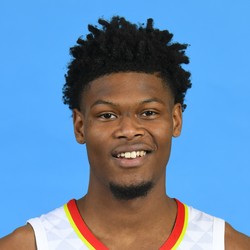 According to Hawks GM Travis Schlenk, Cam Reddish has got a "really bright future" in Atlanta.

A lottery pick out of Duke just a year ago, Reddish has shown a great deal of potential in his first year with the Hawks. He's become part of the team's young "Core Five" along with Trae Young, DeAndre Hunter, Kevin Huerter, and John Collins. Specifically as it relates to Reddish's bright future, Schlenk spoke in particular about his defense, stating "what he allows us to do defensively, just with his length and athleticism and anticipation is going to be really important to us in the future. He's got a chance to be one of the best defensive players in the league." Reddish started in 34 of the 58 games he played in 2019, averaging 10.5 points, 3.7 rebounds, 1.5 assists, 1.1 steals, and 0.5 blocks in 26.7 minutes per game. He only shot 38.4% from the field, so he'll have to work on his efficiency as he progresses in his career, but to have the incredible support and praise from your GM can only help boost a players confidence moving forward. Look for Reddish to solidify his role in the Hawks' starting lineup moving forward and hopefully the production will follow suit.

Reddish also added two rebounds, one steal, and one assist prior to exiting the game with leg cramps. Treveon Graham and Vince Carter should pick up more minutes off the bench if Reddish were to miss time or be limited, but neither will see enough action to be a factor in fantasy. Reddish will have the opportunity to suit up in Monday night’s home contest against the Charlotte Hornets.

Cam Reddish (back) is listed as probable for Saturday’s game against the Grizzlies.

Reddish picked up a back injury in Friday’s loss to the Wizards, but it doesn’t appear to be serious enough to keep him from suiting up on Saturday. Coming off scoring a season-high 28 points, Reddish could see an expanded role if Trae Young (illness) is ruled out. Fantasy owners should monitor his official status closer to tip-off.

Reddish’s career-high 28 points came in the same game he committed a career-high seven turnovers. Arguably his best game coming off the bench this year, his perimeter shot is starting to blossom. He is evolving into the all-around player the Hawks envisioned when they drafted him and is a must-own.

Kyle Clancy11 weeks ago
Cam Reddish (back) ruled out Monday

Cam Reddish (back) has been ruled out for Monday’s game against the Grizzlies.

Reddish (back) was downgraded from questionable to doubtful for Monday’s game, and the team later ultimately ruled him out. Bruno Fernando will start in his place and should see an uptick in minutes and usage. Reddish’s next chance to return will be Friday against the Wizards.