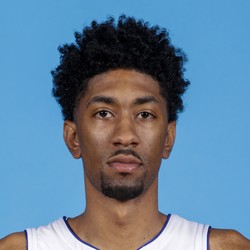 Yahoo PF,C
ESPN PF,C
CBS PF
Christian Wood set to become a free agent, but will he be back in Detroit?

Pistons F/C Christian Wood is set to become a free agent after the summer, and according to the Athletic, there’s about a 70% chance he remains in Detroit.

Wood provided NBA teams with a glimpse of what he was capable of in eight games with the Pelicans in 2018. He averaged 16.9 points and 7.9 rebounds in just 23 minutes per game. Detroit signed him in the off-season, and before the season was suspended due to the COVID-19 pandemic, Wood was making a run at the “Most Improved Player” award. In 62 games, he was averaging 13.1 points, 6.3 rebounds, one assist, and 0.9 blocks in just 21 minutes per game. But those numbers skyrocketed even more after the All-Star break, after the Pistons traded long-time C Andre Drummond to the Cavaliers. Since the All-Star break, Wood averaged 24 points and almost 10 boards per game. The thought here is that Detroit could make Wood a cornerstone of the team’s future, and that “Wood shows his appreciation to the franchise that gave him his first real opportunity.” He’ll be a hot commodity next year in fantasy leagues as a big man that can produce in multiple categories.

According to Shams Charania of The Athletic, F/C Christian Wood of the Detroit Pistons has tested positive for coronavirus.

Wood went for 30 points and 11 rebounds against Rudy Gobert exactly one week ago today. This is the third positive test in the NBA so far, and the first outside of the Utah Organization (Gobert and Donovan Mitchell). Hopefully no other players test positive, but this is the exact reason why commissioner Adam Silver decided to suspend play indefinitely, because this disease is highly contagious and can spread from person to person like wildfire.

As per usual, Wood was phenomenal on Wednesday en route to setting a new career high with 32 points on an astounding 77 percent shooting. The four-year big man continues to take advantage of the minutes he is receiving and has been one of the nicer surprises in fantasy this year. The NBA has currently suspended it's season until further notice in relation to a member of the Utah Jazz testing positive for COVID-19, so it is not known when Wood and the Pistons will take the court next. During the month of March, Wood has averaged 26.6 points and 9.4 rebounds a night while shooting over 60 percent from the field.

After a career-night on Saturday, Wood cooled off a bit during Sunday's loss to the Knicks. The fourth-year pro managed a team-high 22 points and came two rebounds shy of his third double-double of the month. The Pistons have dropped 11 of their last 12 games and while their playoff chances are slim, Christian Wood should continue to dominate opposing front-courts for the remainder of the season.

Wood was the only bright spot for the Pistons tonight, setting a new career-high with 30 points while also grabbing 11 boards. Wood is easily one of the most valuable waiver-wire additions in fantasy leagues this year, and his owners are thrilled to have him on their rosters as the fantasy playoffs are fast approaching. He’s been a top-25 guy statistically since the beginning of February, when Detroit traded away All-Star Center Andre Drummond.

Adam Koffler17 weeks ago
Should I Trade...?
Do Not Sell
Are you looking to contact Customer Support about a subscription or account related question?
Yes
No, I'm a California resident looking for the California Consumer Privacy Act form