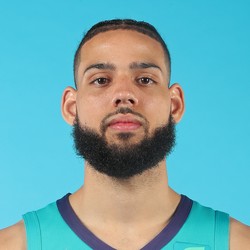 Martin stuffed the stat-sheet this past Wednesday against the Heat as he was able to make a significant contribution in the rebounding department with eight. His playing time has significantly increased this month, as he is averaging 32.2 minutes per game; however, his inconsistent and conservative game makes him hard to trust in line-ups. His volume of minutes makes Martin interesting enough to keep on your radar for deep-league play, but other than that, he is a fade in most formats.

Cody Martin scored three points (1-6 FG, 1-4 FT), dished out a career-high nine assists, and had two steals in 29 minutes off the bench in Saturday night's 108-99 win over Houston.

Martin struggled with his shot tonight, going 1-6 from the floor and 1-4 from the free throw line, but he was looking like Steve Nash out there tonight for the Hornets. He has now set a career-high for assists in back-to-back games, as last game he went for his previous career-high of seven assists. In his last five games, Martin is averaging almost six assists and 1.6 steals in 30 minutes per game. He's gone completely overlooked in most leagues, possibly because nobody can tell the difference between Cody and his brother Caleb Martin, but he's worthy of a roster spot as Charlotte has the highly-coveted four game-week coming up.

Martin didn't produce much in the scoring department, but managed to dish out a career-high seven assists on Thursday. He continues to contribute in multiple categories, and is worth owning in deep-league rotisserie formats. Martin is averaging 4.8 points, 3.2 rebounds, 1.8 assists and 0.8 steals across 45 games this year. The Hornets next scheduled contest is Saturday, home against the Rockets.

It was another impactful night for Martin as he took advantage of his increased role this past Tuesday against the Spurs. In the 12 games in which he has seen 25 minutes of playing time or more, his production is nearly doubled as he has averaged 8.25 points, 6.25 rebounds, 2.75 assists, and 1.25 steals per game. Although this is a small sample size, Martin has been improving his game consistently and is slowly carving out a worth-while role in the rotation. He could be the x-factor you need to put your team in position for success during the back-half of the year, if you have the roster space he would be a good sneaky pick-up in deep-leagues barring a tremendous decrease in his playing time moving forward.

Cody Martin will start for the injured Devonte’ Graham (ankle) on Tuesday vs. San Antonio.

Martin has been seeing minutes in the mid-20s recently off the bench, and will have an opportunity tonight to show what he can do with starter minutes. He’s a fantastic play in DFS tonight, and should also be on your radar in season long leagues should Graham’s ankle injury cause him to miss more time. Terry Rozier will shift to the point guard spot with Graham out tonight.