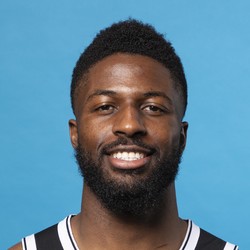 David Nwaba exited Thursday's loss to the Spurs early with a right leg injury, he was later diagnosed with a right torn Achilles tendon.

Nwaba had to be helped off the court and wasn't able to put any weight on his right leg. It was reported that he suffered a torn Achilles, ending his season. Wilson Chandler and Joe Harris will see an uptick minutes with Nwaba sidelined for the rest of the year.

David Nwaba (ankle) will play Thursday against the Spurs.

Nwaba was probable heading into Thurday's game, but has been cleared to play. He is averaging 5.3 points, 2.3 rebounds, 0.3 assists, 0.5 steals and 0.6 blocks across 19 games this year.

The Brooklyn Nets on Twitter have listed David Nwaba as probable for tonight’s match-up with the San Antonio Spurs. Nwaba slightly injured his ankle in Tuesday’s win over the New Orleans Pelicans. The shooting guard contributed 12 points, three rebounds, two 3-pointers, a block and a steal in 18 minutes off the bench.

Nwaba will need some injuries in the depth chart ahead of him so he could have more consistent numbers. The guard is a watch list player for now in shallow leagues and a possible add for deep roster leagues.

David Nwaba contributed across the board with ten points, four rebounds, one assist, one block and two steals.

Nwaba played 17 minutes, which is above average for him coming off the bench. Consider this game as an anomaly. He won't do much to help in fantasy except for the deepest of leagues.

David Nwaba came off the bench for 18 minutes. He produced eight points, three rebounds and one steal.

Nwaba has averaged 8.6 points in his last five games. He does get about 15+ minutes per game but he doesn't do much with it. Expect his minutes to go down once Caris LeVert and Kyrie Irving return to the rotation.