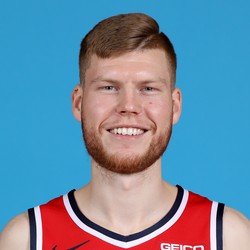 While it wasn't pretty, Bertans did take a step forward against New York, producing 16 points on a 44.4 field-goal percentage along with two triples and six made free throws. The forward was still unable to produce in rebounds, however, posting his second straight two-rebound outing. Bertans will get a break during the All-Star break before looking to start the remainder of the season off on the right foot against the Cavaliers on February 21st.

Bertans had his lowest scoring game thus far this month, largely in thanks to a three-point percentage of 22.2, his lowest since January 30th. The forward will look to bounce back against the New York Knicks on February 12th and has a good chance to do so.

Bertans took another step forward against Dallas, grabbing his most rebounds since December 9th to go with his 20 point game fueled by his second consecutive five triple performance. The small forward best serves as a great value DFS play but is also worth consideration in season-long leagues.

With the Wizards in blowout mode and just under a third of the Wizards' shots coming from Bradley Beal, Bertans took less than 10 field-goal attempts for the second time this month. The forward made good use of his shots, however, connecting on all four of his three-point attempts to align him with his season average of 15 points. Bertans figures to see more opportunity against the Charlotte Hornets on January 30th.

While Bertans had his night saved by a full stat sheet, the forward went just 3-for-12 shooting, good for his third sub-30 field-goal percentage this month. On the bright side, thanks to his three-point ability, Bertans has missed out on double-digit points just once in January.