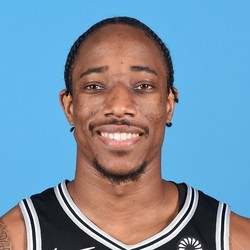 DeRozan didn't light up the scoreboard Tuesday but made up for it with his season-high assist count. He should continue to see huge minutes and usage as the Spurs make a last-ditch effort to save their 22-year playoff streak down the home stretch of the season.

DeRozan broke out of his relative slump Friday, topping 20 points for the first time in over a week. He's the top option in San Antonio and should continue to be slotted into fantasy lineups across all formats.

DeRozan has underwhelmed lately, especially given the fact that LaMarcus Aldrige has been sitting out with an injured shoulder. He'll look to get back above 20 points for the first time in over a week when San Antonio faces Brooklyn on Friday.

DeRozan floundered from a scoring standpoint on Monday night barely eking out a double-digit output with 10 points. He supported owners in other areas with a combined 13 rebounds and assists. Still, it was clear DeRozan struggled without his co-star LaMarcus Aldridge on Monday. It's fair to wonder if the small-forward can maintain stellar production with more of a load placed on his shoulders. He'll look to bounce back against the Hornets on Tuesday.

DeRozan has been a glimmering example of consistency throughout his career and not much changed this month. While his scoring took a slight dip compared to his season averages, he saw a bump in both his rebounding and assisting numbers to make his overall fantasy value remain about the same. Over nine games in February DeRozan averaged 20.6 points, 6.1 assists, 5.1 rebounds, 1.1 steals, and 0.2 blocks. While he lacks the upside that he had earlier in his career, DeRozan is still a set 'em and forget 'em fantasy option at the small forward position.