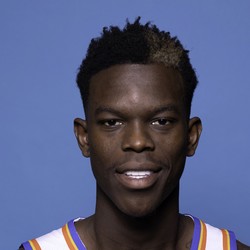 Dennis Schroder led the Thunder in points against the Magic on Wednesday, scoring 31 on a red-hot 13-of-18, going 3-of-4 from deep and making 2-of-3 free throws. His point total and nine assists each tie a season-high and he added three rebounds to his final box score.

"Second-Half" Schroder has scored 54 points over his last two games. While he doesn't fit into the starting lineup, he's been closing out games as him and Chris Paul play very well together on the court. His 18.3 points per game are good for fourth in the league for players coming off the bench. Still available in about 20% of leagues, he's worth a pickup in all formats.

Dennis Schroder came off the bench Monday night and lit up the Rockets for 23 points in 34 minutes, shooting 9-of-16 and making 3-of-7 deep attempts. He also grabbed five rebounds and had four assists.

The "backup" point guard stepped up big when Chris Paul struggled to find his shot. Schroder scored 11 of his 23 points in the fourth quarter, led the bench in scoring, and helped the Thunder to secure the comeback road win. The electric guard has shown to have a pretty symbiotic relationship with veteran Chris Paul as they each have no problem conceding to the hot hand and can share crucial minutes on the court. Still available in about a quarter of leagues, check your waiver wire and snag him if he's available. He's currently third in scoring (18.2) and second in assists (3.8) per game for the Thunder.

Dennis Schroder assumed his normal role off the bench in Saturday's win over the Blazers. He scored 15 points on 5-of-11, making both attempts from deep and going 4-of-4 from the charity stripe. He added three rebounds and four assists.

Averaging, 17.7 points, 3.4 rebounds, and 3.9 assists in January, this game was just in line with his Schroder's averages. He has seen an uptick in minutes recently. His 33 minutes per game this month are his best of the season, but unfortunately he isn't able to capture the same magic he was showing in December, when he scored 22.3 points per game. Coach Billy Donovan doesn't seem to be shying away from using Schroder down the stretch in close games, so he's worth a look at picking up in most league formats.

Schroder is averaging 18.3 points, 3.8 rebounds, 3.8 assists, 0.7 steals, and 1.9 3PM per game over 41 games. Schroder ranks around the top 100 in category formats and would see an increase in value should anything change with Chris Paul at the trade deadline.

Schroder caught fire Wednesday and put up his highest point total in over three weeks Wednesday night. He continues to play starter minutes despite coming off the bench and needs to be owned in all formats. His next game comes against the Heat on Friday night.