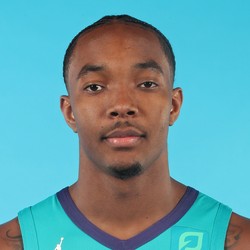 Devonte' Graham scored a game-high 30 points on 11-19 shooting from the field, with one rebound, six assists, one steal, five turnovers, and eight triples in 36 minutes as Charlotte defeats Miami 109-98 on Wednesday night.

Graham has been trending up the last four contests, scoring 24, 23, 27, and now 30 points in those games. He shoots a ton of threes, and as long as he's hitting at a decent clip, he's providing his fantasy owners with a ton of value between three-balls and assists. Graham will unfortunately have his hot streak halted as the NBA has suspended the season indefinitely after Jazz C Rudy Gobert tested positive for the coronavirus Wednesday night.

Graham played 46 minutes in this one, and while he wasn’t super efficient shooting from the field, he quietly put together a huge night for fantasy owners, with 10 assists, four steals, and most importantly no turnovers. Very impressive for a guard that has the ball in his hands often and that took 26 shots in 46 minutes of action. This was Graham’s first double-double since back before the All-Star break. He’s been one of the best early season pickups this year, and hopefully he’ll have more nights like tonight to help his fantasy owners down the stretch.

Graham looked comfortable tonight, and as a result, shot the ball very effectively. After two dud performances after the All-Star break where he averaged three points on 1-17 shooting, Graham has come back alive for the Hornets. In his last five, he's averaging 20.6 points, 5.2 assists, and 0.8 steals in 31 minutes per game. The assists are down a bit from his season average of 7.5 per game, but his scoring is also up a bit from his season average of 17.8 points per game. Graham has had an incredible sophomore season for Charlotte, aside from the not-so-great field goal percentage of 37.6% on the year, but fantasy owners should be able to overlook that one downfall to his game.

After a one-game absence, Graham (ankle) entered Thursday's contest with the questionable tag, but was able to shake off the injury to drop a team-high 24 points. He has poured in at least 20 points in two of his last four games, and continues to be Charlotte's primary scoring option. Graham will look to keep things rolling in Saturday's tilt against the Rockets.

Devonte' Graham (ankle) is available to play and will be in the starting five for Thursday’s game against the Nuggets.

Graham who was considered questionable due to ankle soreness, is available and will start Thursday’s game against Denver. Fantasy owners can safely insert Graham into their starting lineups. He is averaging 17.6 points, 3.5 rebounds, 7.5 assists, 0.9 steals and 3.4 triples across 59 games this season.