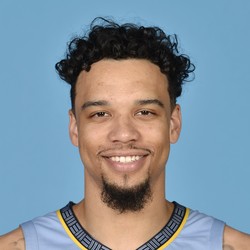 Brooks can light up a scoreboard when he gets hot from the field but offers very few peripheral stats, giving him a low fantasy floor that's tough to trust on a consistent basis.

That's three straight 20-point performances for the third year shooting guard out of Oregon. He's averaged 26 points over that stretch. Brooks saw a slight dip in scoring production earlier in the month that will affect his final monthly numbers but hopefully he can ride this recent momentum into a strong March as the Grizzlies battle for a playoff spot. Brooks will finish February with 14.1 points, 3.2 rebounds, 2.0 assist, 0.5 steals, and 0.3 blocks.

Brooks relies primarily relies on scoring for his fantasy production, which has been inconsistent throughout the season. He's worth considering in deeper leagues but isn't a reliable option night in and night out.

Brooks took 26 attempts from the floor, a season-high. Brooks tried to will the team back into the game. With Jackson Jr. and Clarke out for the next few weeks, Brooks will have a green light as the Grizzlies try to manufacture points. The Grizzlies play the Kings on Friday.

That is back-to-back games Brooks has been held under 30 percent from the floor. After getting the contract extension, Brooks' play has tapered off. A true test of his future value should reveal itself once Justice Winslow suits up after the All-Star break. Kyle Anderson will likely be removed from the starting unit, and Brooks may lose some shots. The Grizzlies don't play until next Thursday against the Kings.