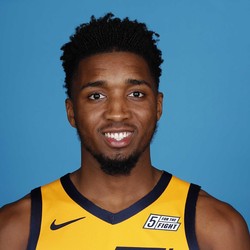 Mitchell is averaging 24.7 points, 4.3 rebounds, 4.3 assists, and 1.1 steals per game, shooting 45.7 percent for the year. His scoring average and field goal percentage are both slightly above last year’s pace. Mitchell remains a solid fantasy play each night. Utah plays Monday at home against Indiana.

Mitchell struggled to hit his shot late in OT but he still managed to tie his career-high in points scored (46). He is a must-start in all regular fantasy leagues and is a viable play in DFS contests as well.

Mitchell played 36 minutes after missing one game with a respiratory issue. For the season Mitchell ranks just inside the top 40 in 9-category leagues averaging 24.2 points, 4.3 rebounds, 4.4 assists, 1.1 steals, and 2.2 3PM per game. Mitchell should be a top DFS play Thursday against New Orleans.

Donovan Mitchell will play Tuesday against the Nets after missing his last game due to illness.

Mitchell's upper-respiratory issue will only cost him one contest, and he'll be back in the starting lineup against Kyrie Irving and Co. He'll likely handle a similar workload to what he's seen all season.

Mitchell's services were no longer needed with nine minutes left in the fourth quarter, at which point Utah was already leading by 23. His early benching explains his lower numbers, though his health remains a much higher priority than playing a few extra minutes in a blowout win over an inferior opponent. Mitchell and the Jazz will look to extend their winning streak to eight when they play the Hornets on Friday.