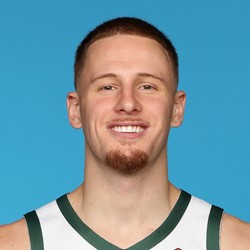 Donte DiVincenzo supplied 19 points (8-14 FG, 3-7 3PT), eight rebounds, one assist, one block, and one steal across 29 minutes of play off the bench Wednesday night.

DiVincenzo matched his career-high in points and led the Bucks off the bench in their final game before the All-Star break. He's locked up a spot in Milwaukee's rotation but isn't vital enough to warrant ownership in most fantasy leagues.

DiVincenzo missed the previous game with an ankle injury but looked good in his return to action Sunday. He's secured a spot in the Bucks rotation off the bench but is only worth fantasy consideration in deeper formats.

It was a nice outing for DiVincenzo, who had failed to score in double figures in his previous two games. He's shown flashes in his second professional season but has been too inconsistent to trust in all but the deepest of fantasy leagues right now.

The second-year guard continues to improve and has become a key part of Milwaukee's rotation. He should be on the fantasy radar in standard leagues and definitely owned in deeper leagues.