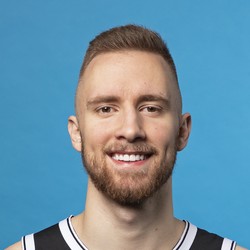 Dzanan Musa missed his only field goal and did not contribute to the Nets loss.

Musa was averaging close to 12 minutes per game, but the Nets opted to keep him out of this game. He'll get his playing time as the Nets are keen to develop their top pick from last year. However, his contributions will be limited with just 12 minutes per game.

The Brooklyn Nets selected Dzanan Musa, a forward from Bosnia-Herzegovina, with the 29th overall pick in the 2018 NBA Draft.

Musa brings on-ball scoring to the Nets, where he’ll likely come off the bench mainly for offense. Musa should come to the NBA this year as he has a relatively low buyout, but he’s still a work-in-progress and doesn’t provide much value outside scoring.

Matt Wiswell2 years ago
Do Not Sell
Are you looking to contact Customer Support about a subscription or account related question?
Yes
No, I'm a California resident looking for the California Consumer Privacy Act form